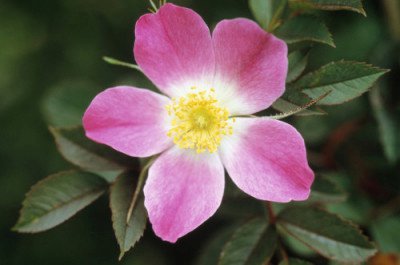 What picture appears before our eyes when we think of the rose? Certainly first and foremost that of the hybrid tea rose, distinguished and elegantly slim with its multi-petaled bloom, which hides its innermost secrets from the observer. The colour of the petals, their shape, the way they grow: there appear to be an impossibly large number of varieties of rose, in fact there are about 20 000 of them! In this deluge it is all too easy to forget their far older original sisters the dog roses, the petals of which are simple and which open their hearts wide to us and are rich in perfume and rose hips. The strength for their petals is drawn from the deep root which is firmly embedded in the ground. The hybrid tea rose has lost this vitality and is therefore always grafted to the rootstock of a dog rose.

Surprising details can be found out about the rose: for example each petal of the five-petaled bloom has its own form, and even the five small green sepals differ from each other.

Use in Skin Care and Remedies

In WALA Medicinal Products the rose is found in fortifying preparations, such as, for example, Rose Iron/Graphite, Globuli velati, and in various Eye drops. Its healing effect on chapped and inflamed skin is displayed inWALA Rosatum Ointment.

On account of their tannin content, rose petals have an astringent effect and were formerly used as an infusion for diarrhoea. Externally they were used in mouthwashes and gargles. In the Orient, rose oil and rose-water are taken for cramp-like stomach complaints and liver and gallbladder colic.

Externally, rose preparations are used for inflammation of the breast, thrush, chapped skin or cold sores, in which the antiseptic, anti-inflammatory and astringent properties of the rose are paramount.

In aromatherapy, the rose is used for its relaxant and de-stressing properties in tense muscles caused by nervous complaints, disturbed sleep or to lighten the mood in depression.

The word rose presumably comes from the Indo-Germanic word vrod or vrad, the meaning of which is retained in Sanskrit as vrad = tender. The extent to which the rose has always accompanied mankind is reflected in the fact that the word occurs in all of the world’s languages, it is only absent in the language of the Eskimos. It was already the symbol for love, beauty and grace at a very early stage and in Ancient Greece it also signified joie de vivre. This wondrous creation seemed to be so unearthly that in many cultures it was seen as a gift from the gods, in some the petals were even seen as the blood of the gods, particularly the gods of love and fertility. The fallen angel Lucifer, on the other hand, is thought to have acquired the climbing rose in order via the thorny route to be able to climb easily back into heaven.

There are innumerable other stories about the rose: from Cleopatra who is said to have impregnated the sail of her ship with rose-water, the Romans who, like no one before or after them, placed the rose in the centre of their daily lives: garlands of fresh roses, which were commonly worn around the neck, rose beds and festivals heavily decorated with roses were an expression of an almost decadent inclination towards the rose.

Sub rosa dictum: the dictum under the rose was the stock phrase of secret societies such as the Rosicrucians and the Freemasons, which adopted the white rose as their symbol and had it hanging over the table as a stuccoed rose. Something promised under the rose was deemed to be absolutely confidential. And in the rose the alchemists saw wisdom and the symbol of a clear spirit.

Romanesque and Gothic master builders and stonemasons discovered the rose for their buildings: its geometry found its way into windows, stone roses crowned church towers as a sign that human life only really unfolds in the hereafter.

The rose as a sign of the Mother of God and Jesus is found again in Mary, who is depicted so often as Mary with the child in a rose bower. Even the first wreaths were in fact said to have been made with roses.

It’s golden age as a healing plant came with the pharmacist’s rose (Rosa Gallica) in the 13th century in Provins near Paris, where it arrived from Damascus. For almost 600 years Provins was the centre of medicinal rose cultivation, so that in the 16th century, the main street was a large concentration of chemist’s shops and pharmacies. Medicines made from roses were sent from there throughout the world.

Moreover rose galls used to be placed under children’s pillows so that they could sleep better. For this reason in Germany they are also referred to as sleep apple

« 7 FACTS THAT WILL CHANGE YOUR SKIN
Garden Is a Seedbed for Green Cosmetics »
Warning: count(): Parameter must be an array or an object that implements Countable in /homepages/42/d106200819/htdocs/wp-includes/class-wp-comment-query.php on line 399