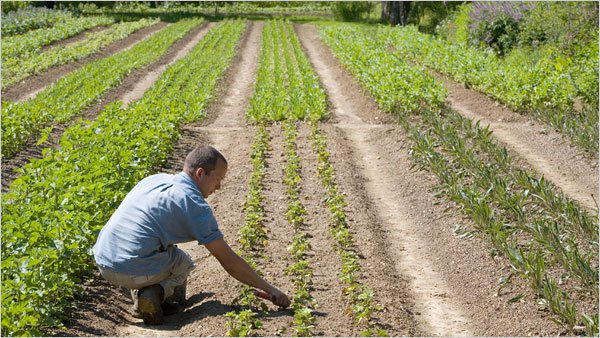 Garden Is a Seedbed for Green Cosmetics

ECKWÄLDEN, Germany — You know you are not in an ordinary garden when a man in dirt-covered trousers, tending witch-hazel plants, describes his work in words that could come from Nietzsche.

It demands a higher level of consciousness and a force of will to garden at this level,” said Joscha Huter, 40, who cultivates the plants and flowers used to make the popular, expensive line of German natural cosmetics, Dr. Hauschka. “There’s a point where gardening becomes an art.”

There’s also a point where it becomes a crackerjack business: this rarefied garden in a southern German valley is the seedbed for an environmental marketing phenomenon that has captivated Hollywood.

Julia Roberts, Jennifer Aniston, Richard Gere and Robert Downey Jr. are among the celebrities who have publicly extolled Dr. Hauschka’s skin care products. While the stars may not express themselves like 19th-century German philosophers, their devotion has helped to win Dr. Hauschka a cult-like following from Beverly Hills to the Upper East Side.

Sales of WALA Heilmittel, the maker of Dr. Hauschka, have more than doubled in the last five years, to nearly $150 million, about 8 percent of that from the United States, where it also sells herbal remedies. The 73-year-old company, which labored for decades in obscurity, now finds itself in the sweet spot of a booming market for green cosmetics. Estée Lauder, L’Oréal, and other giants are pushing all-natural brands.

…WALA is one of dozens of German companies — from windmill manufacturers to organic beverage producers — that are benefiting from a growing global appetite for environmentally friendly products. Germany’s recent economic renaissance has had an unmistakably green hue.

Even in this Birkenstock land, WALA is uncommonly chaste. Visitors to the garden are asked to switch off their cellphones, for security reasons and to avoid disturbing the harmony of nature.

The fact that WALA’s green label comes with a dash of Hollywood glitter makes its German managers squeamish, given that they run the company almost as a collective, with all the profits either plowed back into operations or handed out to the 700 workers.

…The company’s roots are in herbal medicine. WALA was founded in 1935 by Rudolf Hauschka, a Viennese chemist who sought to develop remedies using only natural ingredients. In 1967, it added the skin care line, named after the founder, who died two years later.

… WALA is based on a school of early 20th-century European philosophy known as anthroposophy. Developed by the Austrian theorist Rudolf Steiner, the philosophy is predicated on the existence of a spiritual world that can be accessed by the human intellect.

Mr. Steiner’s thinking was also influential in more down-to-earth matters. He championed biodynamic agriculture, a rigorous form of organic farming that shuns pesticides and uses no fertilizers that were not already present in the garden.

Dr. Hauschka products are made by WALA Heilmittel at its headquarters and have sales of nearly $150 million.

An acolyte of Mr. Steiner, Rudolf Hauschka planted a biodynamic garden 28 miles west of Stuttgart, in 1955. There, a team of eight gardeners cultivates more than 150 plants, flowers and trees, ranging from Echinacea to monk’s hood. They are harvested by hand, then crushed and dried. Extracts are taken with water, never alcohol.

For the company’s rose cream, one of its signature products, it buys large amounts of rose oil from suppliers in Turkey, Bulgaria, Iran and Afghanistan. The trade allows WALA to engage in more planetary good works. In Afghanistan, it is encouraging farmers to plant roses in place of opium poppies, said Antal Adam, the chief spokesman.

A public relations executive who used to work in Cologne, Mr. Adam took a pay cut to join WALA. Like so many of the employees, he seems to have drunk the organic Kool-Aid — only in this case, it is bitter elixir, a foul-tasting herbal remedy that he cheerfully swigs after lunch to aid digestion.

The same fervor, Mr. Adam said, applies to WALA’s celebrities, who get free samples but no money for their endorsements. “We could always buy a face,” he said. “Our celebrities do this because they are convinced of the product.”

Dr. Hauschka’s success in the United States owes much to Susan West Kurz, a beauty expert and author who transformed a tiny import business into a franchise.

…The company has… refused to sign on to industry certifications in the United States for organic or natural products, because it says its methods are more rigorous than competitors that claim to be organic or all-natural. “Over the last 30 years, every major brand has usurped some of our language,” Ms. West Kurz said.

…Perhaps the fullest expression of WALA’s philosophy is its unorthodox ownership structure. The original owners gave up their stakes in 1986, creating a foundation that is legally owned by the German public, and hence cannot be sold. A similar legal arrangement in the United States makes it impossible to sell the American distribution rights.

Many suitors have tried. In 1997, Estée Lauder paid $300 million for Aveda, a maker of natural beauty products, while L’Oréal paid $1.1 billion for the Body Shop in 2006.

“I get called by private equity firms every day,” said Mirran Rephaely, the chief executive of Dr. Hauschka in the United States.

In Eckwälden, Mr. Lettmann also gets calls. Before joining WALA, he worked for a private equity firm in Munich. Now he keeps a bottle of bitter elixir next to his desk, and sounds less like a finance whiz than a soul mate of Mr. Huter, the philosophical gardener.

“WALA exists in the economic world, but we don’t work for profits, he said . “Our primary impulse, from the beginning, is healing.”

« Plant Portrait: Rose
Warning: count(): Parameter must be an array or an object that implements Countable in /homepages/42/d106200819/htdocs/wp-includes/class-wp-comment-query.php on line 399